These Free Baptist Sermons are available to be used to get ideas in preparing sermons for your people.

They include a short introduction, the main preaching points and sub-points with a short conclusion.

Discouragement! Perhaps you have been there. Many good people have. I was reading recently about a young lawyer who descended into the valley of despondency. Things were going so poorly for him that his friends thought it best to keep all knives and razors away from him for fear of a suicide attempt. In fact, during this time he wrote in his memoirs, “I am now the most miserable man living. Whether I shall ever be better, I cannot tell. I fear I shall not.” The young lawyer who unleashed these desperate feelings of utter hopelessness was none other than Abraham Lincoln.

Discouragement can be so debilitating. In fact, discouragement turns optimism into pessimism and destroys our effectiveness as Christians. J.O. Fraser wrote, “Discouragement is the work of the devil.” In many ways, it is through discouragement that the devil can get a foothold in our lives in order to destroy our vibrance and enthusiasm for life and ministry. As one writer said, “From the beginning of time, it has been one of Satan’s chief and most effective weapons against the people of God.”

In 1 Kings 19, the life of Elijah provides some insights into conquering discouragement. To conquer discouragement, we must realize the causes, recognize the consequences, and receive the cure. At the same time, we must never forget that God cares for us and He is always there for us. As He has promised, I will never leave you nor forsake you (Joshua 1:5b and Hebrews 13:5b). [Continue Reading …]

Mickey Mantle, an almost mythical baseball star who feared he had failed to fulfill career expectations because of alcohol abuse and whose recent years were haunted by self-recrimination, died of cancer early Sunday. He was 63. The former New York Yankees center fielder and a member of baseball’s Hall of Fame said at a July 28 news conference that he had squandered a gifted life and warned admirers he was no role model. “God gave me the ability to play baseball. God gave me everything,” he said. “For the kids out there, don’t be like me.” (Los Angeles Times, Monday, August 14, 1951).

Conversely, Nick Vujicic is the perfect role model for all Christians. He may have no limbs, however, he has no limits when it come to God and serving Him. As Paul Colman writes, “If the size of a man’s capacity lies in his heart and spirit, then Nick Vujicic is a giant of a man! He is tenacious, captivating and enthralling. It is the spirit of Jesus of Nazareth that sustains him and he shines like the brightest lighthouse. I’d travel a long way to hear him speak and would have him on my stage any time. I could not endorse another human being more highly.”

What makes a godly role model? What makes a vessel of honor for God’s service? Well, the apostle Paul gave some hints when he encouraged Timothy to strive to be a godly role model. In short, it begins with a cleansed life—a life that shuns sinful activities and those who propagate sinful activities. At the same time, it involves a sanctified life—a life committed to God and His service. In many ways, a godly role model is someone who has put his life totally in God’s hands—allowing God to mold and shape his life to the honor of God. Will you allow God to mold and shape your life for His honor and service? [Continue Reading …]

In Mark 7:6-7, Jesus said, “This people [referring to the Pharisees] honors Me with their lips, but their heart is far from Me. And in vain they worship Me.” What was Jesus saying? Jesus was saying that they lived a life of pretense—saying one thing and doing another. Oh, how the Pharisees needed to learn to shed the mask of pretense!

Carl Lundquist in “Silent Issues of the Church,” writes “Henry Wingblade used to say that Christian personality is hidden deep inside us. It is unseen, like the soup carried in a tureen high over a waiter’s head. No one knows what’s inside—unless the waiter is bumped and he trips! Just so, people don’t know what’s inside us until we’ve been bumped. But if Christ is living inside, what spills out is the fruit of the Spirit.” If our lives are marked by pretense, may God encourage us to shed that mask of pretense for the living Christ! [Continue Reading …]

There is a story told of a little boy in a grocery store who was standing near an open box of peanut butter cookies. “Now then, young man,” said the grocer as he approached the young man. “What are you up to?” “Nothing,” replied the boy. “Well, it looks to me like you were trying to take a cookie.” “You’re wrong, mister, I’m trying not to!”

There was a contractor who was bidding on a job. While waiting alone in the office of his prospective client, he noticed under a jar on the desk a copy of the competitor’s bid. However, he could not see the numbers because it was partially covered by the jar. So, he decided to lift the jar to sneak a peek. As he lifted the jar, hundreds of BB’s spilled out from the bottomless jar all over the desk and floor.

The apostle Paul summed it up when he wrote these words: “No temptation has overtaken you except such as is common to man; but God is faithful, who will not allow you to be tempted beyond what you are able, but with the temptation will also make the way of escape, that you may be able to bear it” (1 Corinthians 10:13). May God and His word guide us in resisting deadly temptation! After all, we have the victory in Jesus Christ! [Continue Reading …]

We live in a world of competing voices. Everyday we are bombarded by various voices telling us how to live, what we need to buy, how we should spend our time, etc. These voices are real and powerful. Above all, they want us to listen and do as they say.

Have you ever received a trophy – a trophy for some achievement? If you have, you may have placed it on a self, a place of prominence or a place where it can be seen. Ever time you see it, you admire it. Sometimes you actually take hold of it and reminisce. As you reminisce, you notice that it is covered in dust. You dust it off, put it back on the shelf and off you go doing what you were doing before.

God’s word is not a trophy, a trophy to be placed on the shelf of our life. Instead, God’s word is the sword of the Spirit. It is a defensive and offensive weapon. When Jesus was tempted by Satan in the wilderness, Jesus defended Himself by the word of God. It is written … it is written!! That’s powerful stuff!!!

Why is God’s word a powerful tool in the hands of a Christian? [Continue Reading …] 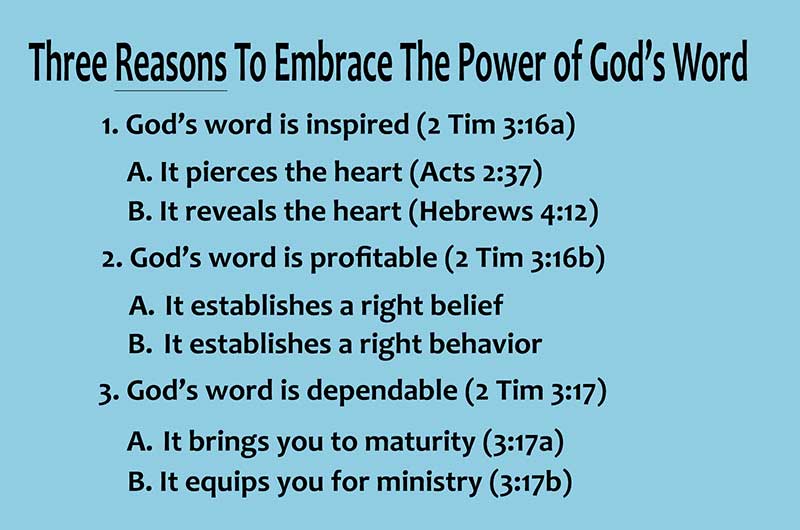 Hudson Taylor was a missionary to China. Howard Taylor was Hudson Taylor’s son and Howard said this of his father: “For forty years the sun never rose on China that God didn’t find my dad on his knees.”